Okay, so this one is going to be a little hard for me to remember. Haha, it was over a year and a half ago. But here it goes! 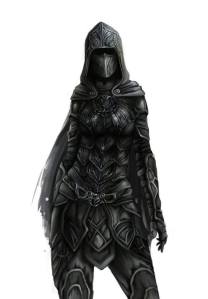 This was my very first cosplay. EVER. I started this one back in the summer of 2013. Immediately after we got back from our very first convention ever (Calgary Comic and Entertainment Expo 2013) i was like “We HAVE to dress up next year!!” So that’s where it all started. It took me a while to find a costume that meant enough to me and was physically possible, for my 0 amount of skills at the time. I came up with this.

I had never loved a game more than Skyrim. I played it for hours and hours and I LIVED it. It was only natural thats why i wanted to cosplay from right?

I picked the nightingale because it was the quest line i most enjoyed in the game. (Not JUST because of Brynjolf, but he was a big part of it 😛 ) plus it looked bad ass!

I spent a ton of time researching cosplayers like Kamuii and Lightning cosplay and watching tutorials, looking up fabrics and so on. Hours and hours and hours. So i decided to order myself some Worbla. Now to this day i still have a partially completed breastplate that is in the shape of a nightingale that i never used. After completing it i decided it wasnt accurate to the character and that they would probably have a leather armor more so than an actual, hard armor. Next i bought some Vinyl. This was better, still hard to work with and i had no idea how to sew, but it was working! (I bought an ancient sewing machine from a lady at work) So progress was made!

I had no pattern and i sort of just started cutting things out! Lots of waste and lots of remaking,

but in the end it turned into something! I decided not to outline the leather in hot glue like a lot of other tutorials because i didnt like how messy it looked. If i ever remake this i will do something to get a more 3D look to the material, not just the silver outline. But, you live and learn! All the silver was painted by hand with a brush. I have since discovered paint pens and they are life changing. Haha.

I bought wool for the cloak and followed some instruction on YouTube of how to make one (was a Red Riding Hood tutorial) It ended up a bit big, but hey, i liked it! Another thing changed from these original photos was the body suit underneath. I have since changed it to a long black sleeve shirt, and black lulu lemon tights. because in the body suit, i cant pee!! i would literally have to take off the entire costume… TIP: Always ensure you can get the costume off easily to go to the bathroom!!

Next up was the sword! this i completely changed after making it. I started out like so:

I decided i hated that, because the blade was think and shaped like a Nerf sword (which i used as a base) so i peeled off everything i could and started again! Covered the base of what i had in craft foam, then taped it all up, and started the Worbla coverage.

Now this sword is still to big, with a super wide blade and now that i know better it bugs the crap out of me! haha, but either way, i am still so happy with how my very first weapon ever turned out!

So once i had everything together it was done! I had finished my first costume and was ready fro my first convention in it!!

I was sooooooooooooooooooo nervous! I have extreme social anxiety and was on the verge of a panic attack, but when you walk in, everyone loves it! Everyone wants your picture, wants to say hi, loves that you love the same game they do! It was amazing, the best experience. And I was hooked! I havent wanted to stop since.

I have changed a few things on this costume, like how the straps do up, how the back does up, repainted, resewn, added parts and so on. Sadly this one is looking pretty rough now and I wont be able to wear it to a convention without a major overhaul. But it will always hold a special place in my heart for being my first!

One thought on “The Making Of: Nightingale Version 1 (Skyrim)”

This site uses Akismet to reduce spam. Learn how your comment data is processed.